By Emily Crochet Bits and Bobs, Types of Crochet 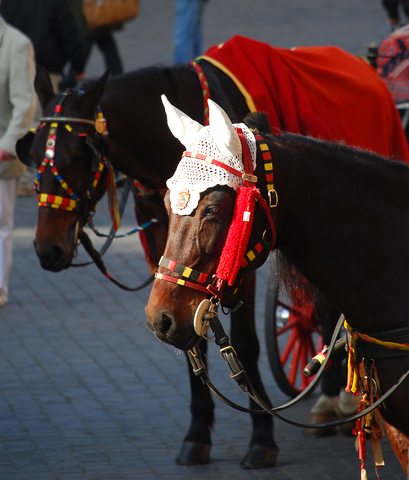 A growing fad in the urban world, yarn bombing, has taken a strong hold in the last few years and created a lot of interest. Otherwise known as graffiti knitting, this is the art of using knit or crocheted cloth to beautify outdoor surroundings. It is done much in the same way that graffiti artists use spray paint to add their own art and individual signature to their urban surroundings, which is why one of the names is graffiti knitting. This movement began in 2005 as a joke by a bored boutique owner on a slow day, but it has rapidly gained momentum and has a very loyal following today. If you haven’t yet seen a yarn bomb, keep your eyes peeled. You may just see one soon now that you know they exist! With the colorful stitch work and funny landscapes created by today’s fiber artists, you’re bound to smile and gain a little cheer when you run across one of these soft, colorful bits of artwork ironically placed on hard metal poles and fences.

How to Create Yarn Bombs

There are many different styles for yarn bombs. First of all, they can be both knit and crochet. Yarn bombs vary as much as any other kind of art, because it is all about individual and the message they want to convey. They can be brightly colored or soft. They can be granny squares or elaborate artwork. It really just depends on the artist. If you’d like to get started with yarn bombing, the easiest way to do it is to create a type of cozy for an object. Yarn bomb cozies can be found in all sorts of places, like phone poles, street signs, fences, garbage cans, bike racks, door handles, or even trees! While many yarn-bombing incidents are rather simple and quick, others can be extremely elaborate or eye-catching. Have you ever seen an entire bus covered in a yarn cozy? It’s definitely happened! 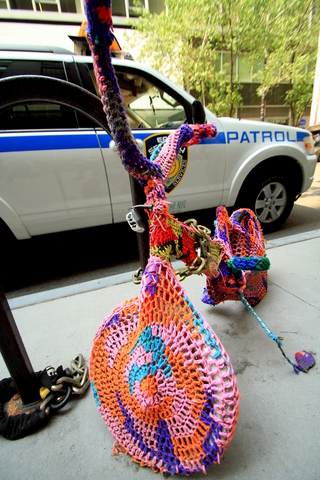 In addition to cozies, yarn bombs can also tell a story, or be a simple piece of artwork, such as a crochet flower garden growing on a chain link fence, or a group of amigurumi animals crossing a bridge. The beauty of yarn bombing is that there really is no wrong way to make it as long as you are using your own individual voice to create something unique.

Today there are so many speculations about why knitters and crocheters create yarn bombs. Many people think that this is some sort of protest or political statement, but the truth is, most yarn bombers do it just for fun. This yarn graffiti brightens up sterile, urban areas and adds a touch of softness to the steel and concrete surrounding society today. These touches of personality in a now impersonal world are a fun way to remind people to stop and enjoy their surrounds more often. For most knitters, there really is no other reason for what they do.

For other knitters, there is simply a rush of adrenaline involved in the process of yarn bombing. While yarn graffiti is not a permanent form of graffiti, it is still technically illegal. This means that most graffiti artists sneak out during the night to add their art to the city, and then run away giggling so they won’t get caught. There doesn’t seem to be much risk of prosecution, though, as most law enforcement officials just seem to laugh on the rare occasion that they do stop to question anyone.

Street art and other forms of graffiti have been around for many years, but they now have a new form of art to contend with. These cheerful patches of soft yarn are rapidly growing in popularity and gaining a very loyal following. There is just something that makes people smile and feel at home waiting for the bus on a yarn covered bench or turning the door handle into your favorite boutique with a soft knit cozy on it. Yarn bombing is a fun, creative way to add a bit of personalization to an impersonal and urban world where so many people have stopped paying attention and just begun to go through the motions.